In today’s post, I’ll show you a quick & easy recipe for a ragout “Zurich Style”, with pork instead of veal. I wish you lots of fun cooking 😉 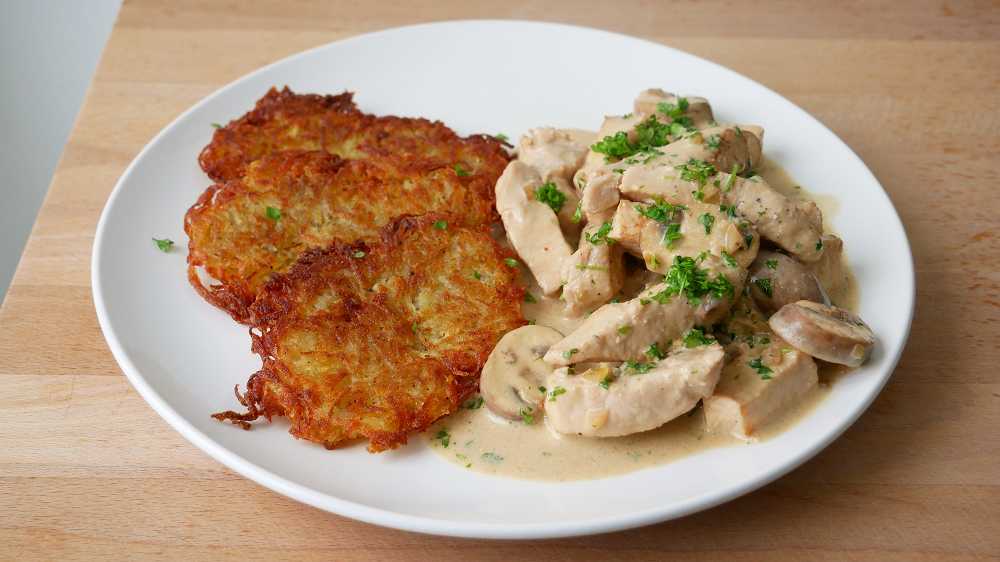 …for the hash browns:

…for the Meat Strips “Zurich Style”:


…preparations for the meat strips: 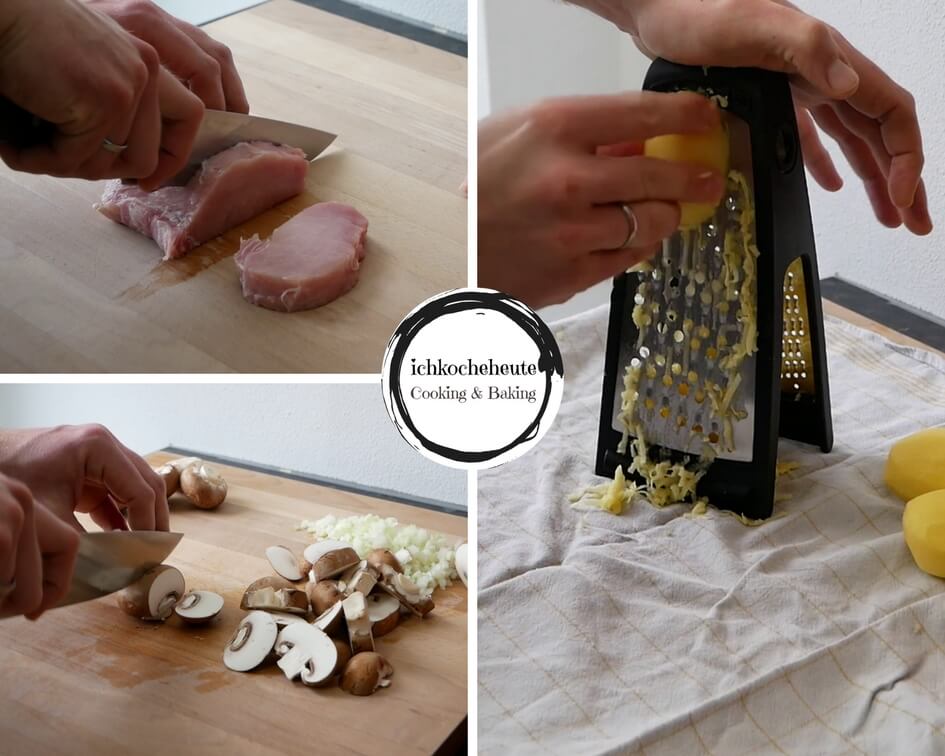 …preparations for the hash browns:

Peel potatoes & coarsely shred them with a grater. Envelop the potato rasps into a clean kitchen towel & squeeze out the liquid over the sink as best as you can.


Give the potato rasps into a large bowl & season with salt & pepper as well as with a bit nutmeg.

…for the hash browns:

Heat up a large frying pan adding plenty of oil (the pan’s bottom should be covered completely) & once the oil is hot enough give the potato dough by tablespoons into the pan & smooth down a bit. 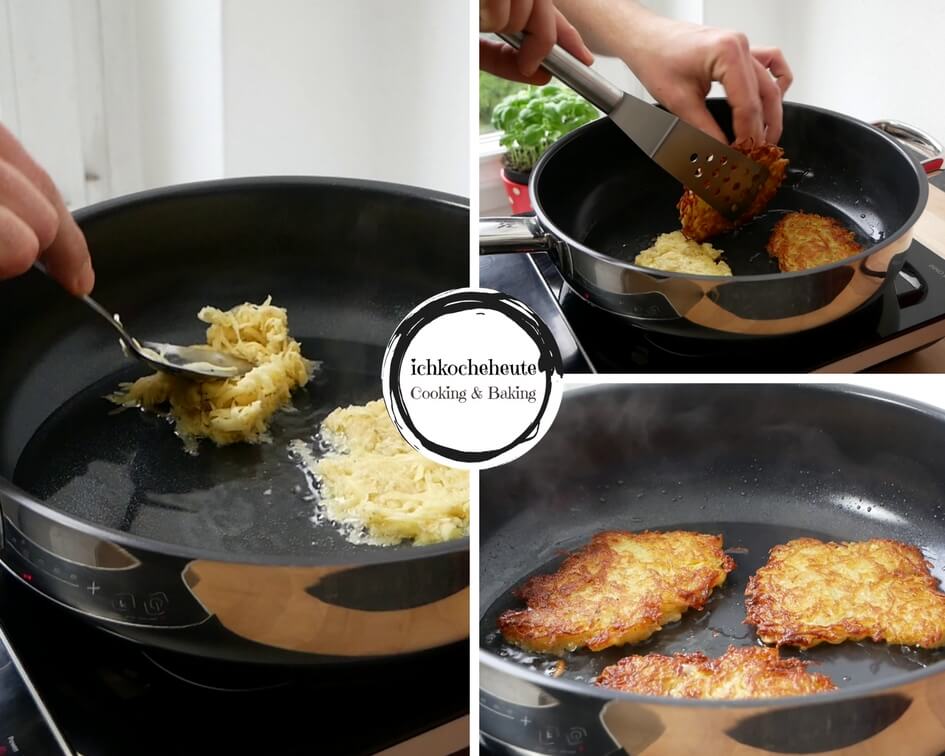 Gently roast the hash browns each side for about 4 – 5 minutes over low to medium heat until golden brown, then turn once & brown until done on the other side for another 4 – 5 minutes.

Lift the done hash browns out of the pan & allow to drain on kitchen paper.


…for the Meat Strips “Zurich Style”:

Parallel to the hash browns heat up a second pan adding a dash oil & sear the meat strips for about 2 minutes over high heat, stirring occasionally. Season the meat with salt & pepper & turn or toss once, then lift the done meat out of the pan & set aside.

Next, put the pan back to the stove & add another dash oil. Then add the mushrooms as well as the chopped onions & sweat over medium heat for about 2 – 3 minutes, stirring occasionally.

Sprinkle the mushrooms with a level teaspoon flour, stir in the flour & then deglaze everything with 125 milliliters white wine. 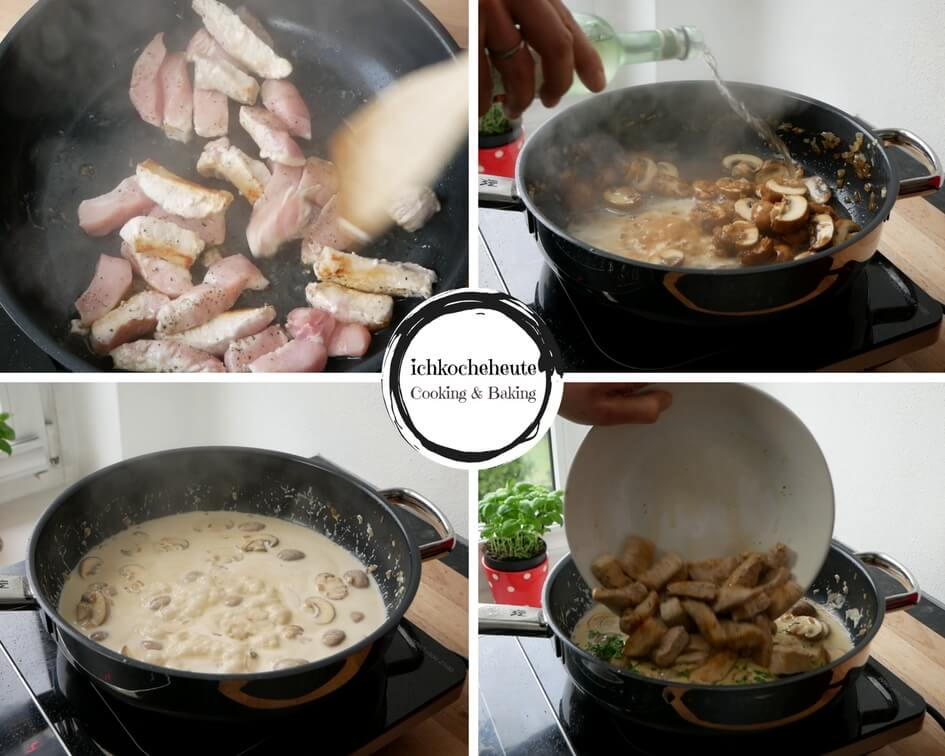 Allow the white wine to reduce for about 1 minute, stirring occasionally & then pour in 200 milliliters cream & allow to boil down until the sauce reaches the desired consistency.

Finally add the chopped parsley, a bit lemon peel of an organic lemon & give the meat strips (with liquid) back to the pan & allow to warm up for about 4 – 5 minutes in the hot sauce.

Then serve the Meat Strips “Zurich Style” along with the Hash Browns & garnished with some extra parsley. I wish you lots of fun cooking 😉

One Reply to “Meat Strips “Zurich Style” with Hash Browns”