Moussaka is a casserole dish originally from the Arab world & also common in Greece, the Balkans and Turkey. Moussaka is next to souvlaki and gyros one of the most famous dishes of Greek cuisine.

The casserole dish consists of a layer of vegetables (for examples potatoes, zucchinis, aubergines), a spicy ground meat sauce and a béchamel layer sprinkled with cheese. In today’s recipe I show you a variant with potatoes and zucchini slices, seasoned with rosemary and thyme. I wish you lots of fun cooking 😉 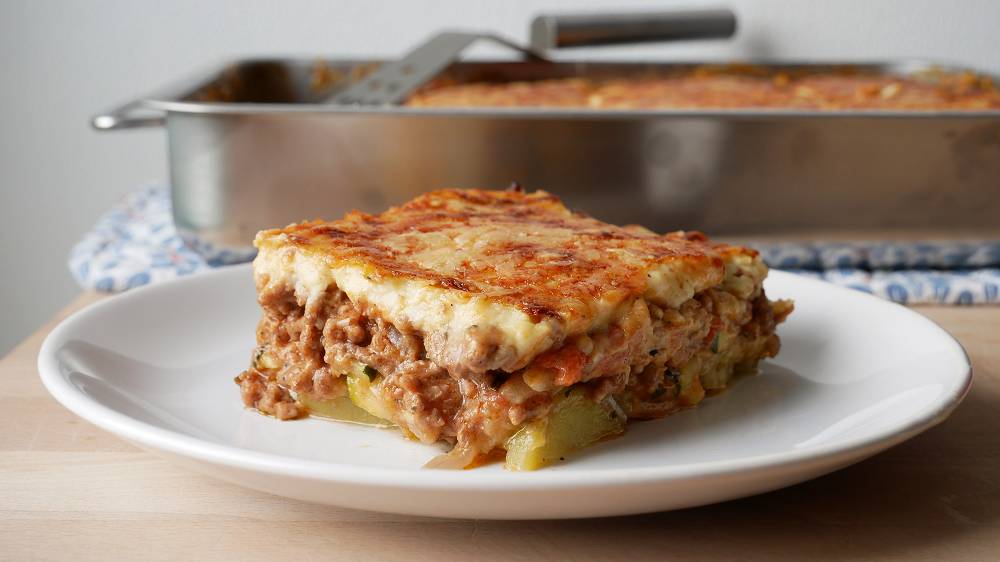 …for the vegetable & ground meat layer:

…for the béchamel layer: 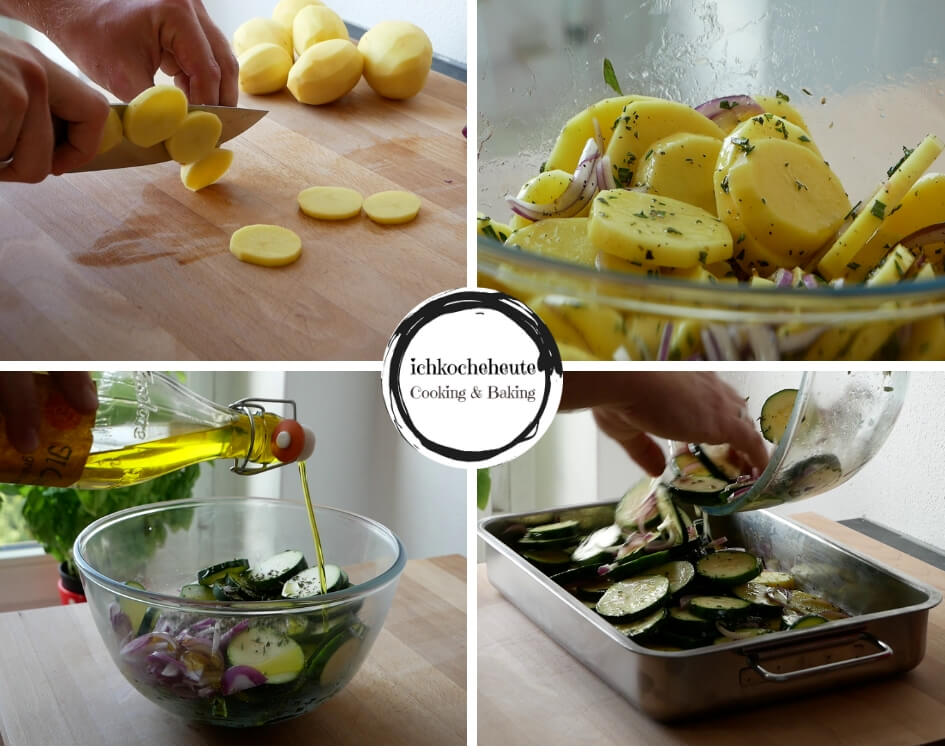 Put the potato slices with half of the onions and a third of rosemary and thyme in a mixing bowl. Add a good dash oil & a generous pinch of salt & pepper, then mix well until oil and spices are evenly distributed. Spread the marinated potato slices in a casserole dish & bake in the preheated oven for 20 minutes.

Next, place zucchini slices with the other half of the onions & another third of rosemary & thyme in a mixing bowl. Season with a dash of oil & a good pinch of salt & pepper and mix well. Get the casserole dish out of the oven after 20 minutes, spread the zucchini slices evenly on top of the potatoes and put everything back to the oven for another 20 minutes.

…for the ground beef mixture:

Peel off another red onion and cut into thin strips. Peel 2 – 3 cloves garlic & chop finely. Heat up a large pan adding a dash of oil and sweat onions & garlic over medium heat for 1 – 2 minutes until glassy. 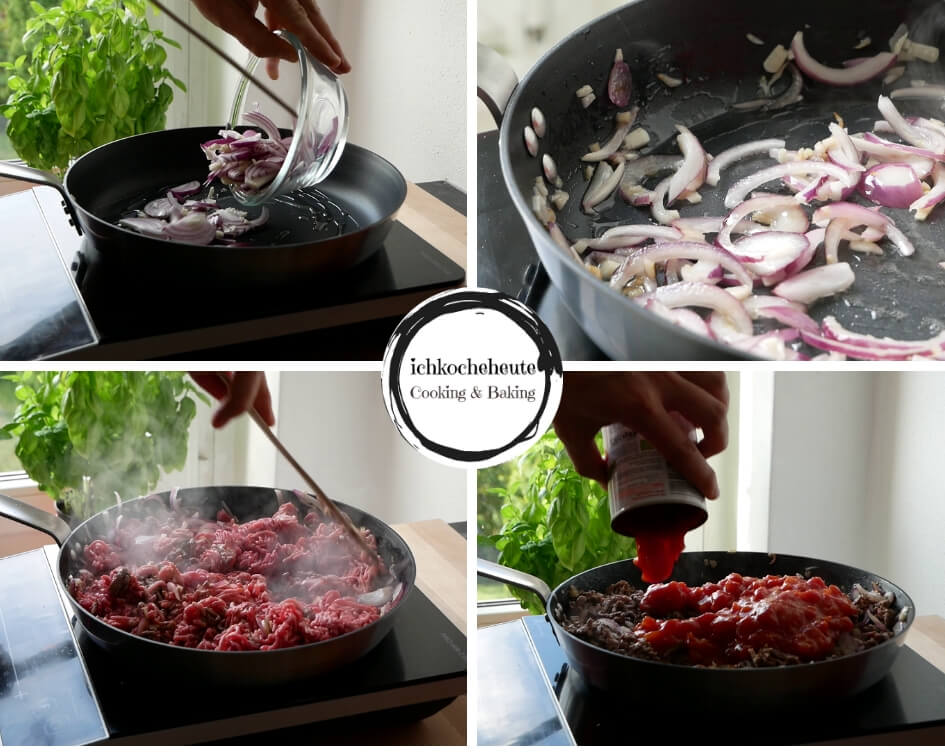 Next, increase the heat slightly, add the ground beef & fry until crumbly for 4 – 5 minutes, stirring occasionally. Season with 1 teaspoon cumin, ½ teaspoon cinnamon, the last third chopped rosemary & thyme & also add 1 can of chopped tomatoes, then stir in & sauté briefly. Finally, season the ground beef mixture with salt & pepper to taste, remove the pan from heat & set aside until further use.

…for the béchamel layer:

Heat up a small saucepan adding 100 grams butter & as soon as the butter is completely melted & starts to foam, add 100 grams of flour. Mix flour and butter well using a whisk and briefly sauté for about 1 minute over medium heat while stirring constantly. Afterwards pour in 500 milliliters milk, stir in until lump-free & heat up with a constant stir. 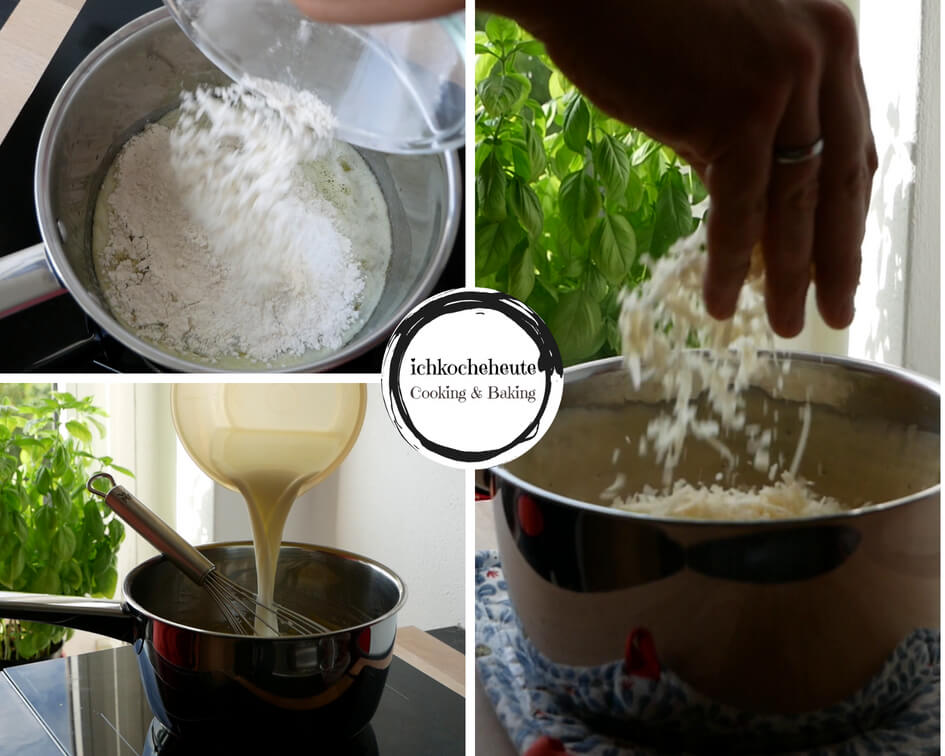 As soon as the sauce thickens, add 250 milliliters of vegetable stock and season with ¼ teaspoon nutmeg & a good pinch of salt & pepper. Stir well and bring the sauce to a simmer. Simmer the sauce for 2 – 3 minutes stirring constantly, then remove from heat & finally stir in 2 eggs and 75 grams of grated Parmesan cheese.

Get the casserole dish out the oven after another 20 minutes. Add approximately one third of the béchamel sauce to the beef mixture & stir in until creamy, then spread evenly on top of the zucchini layer. Finally, pour the remaining béchamel sauce over the ground beef layer, sprinkle everything with another 75 grams of grated Parmesan cheese & bake for a last 30 minutes until golden brown. 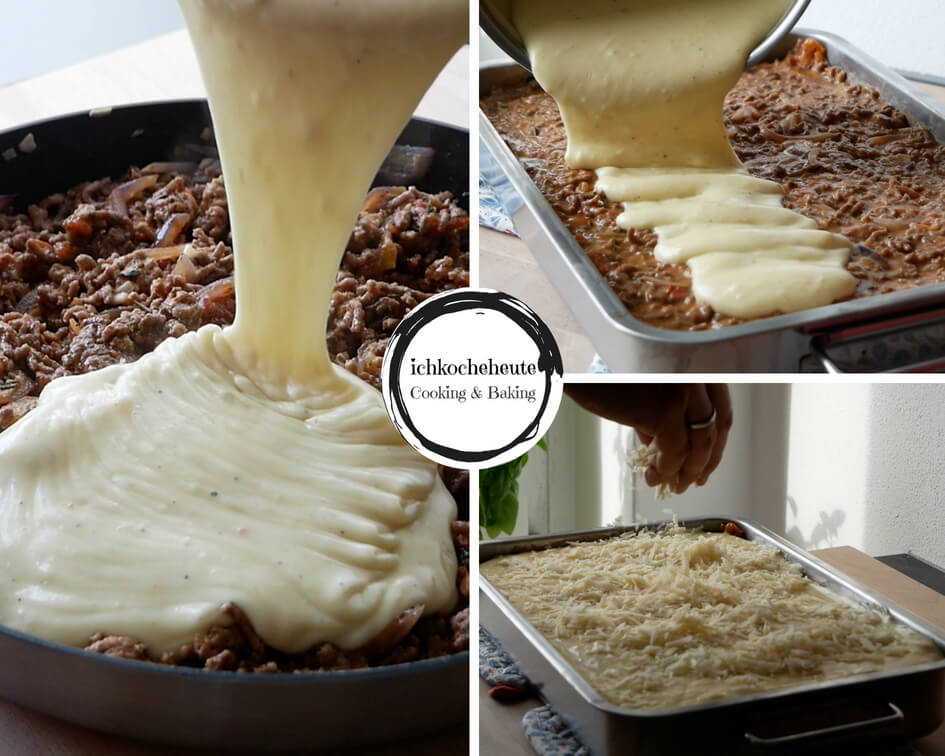 Get the done moussaka out of the oven, allow to cool slightly in the mold & then cut into pieces and serve. Have fun cooking!