Potato pancakes or grated potato patties are small potato pancakes fried in plenty of oil made from grated raw potatoes. Homemade apple sauce is suitable as a side dish, for which the most acidic apple varieties such as Boskop or Cox Orange should be used.

In today’s post I will show you how to cook tasty potato pancakes with applesauce at home. I wish you lots of fun cooking 😉 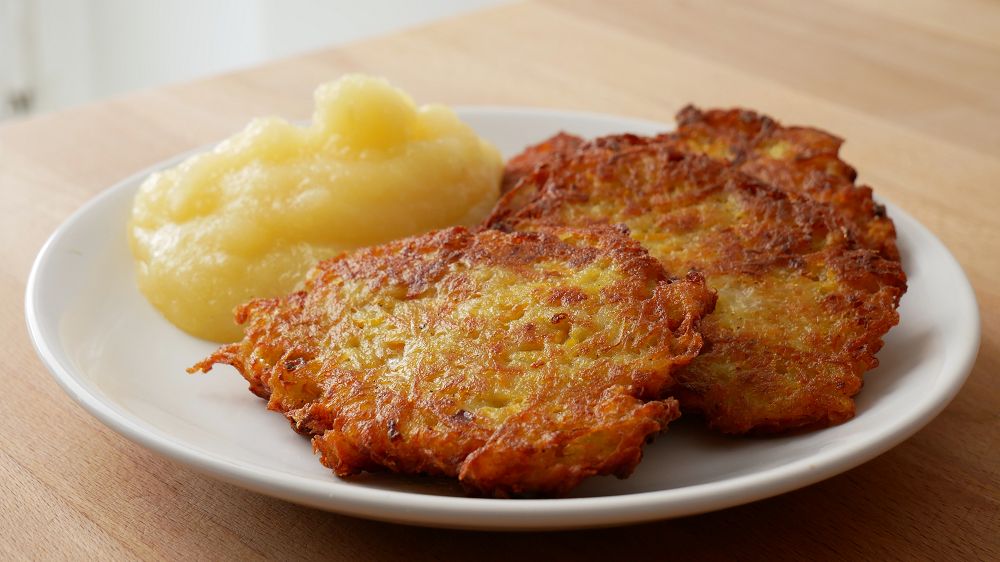 …for the potato pancakes:


…preparations for the applesauce:

Peel & deseed the apples with a potato peeler or knife, then cut into about 2 centimeter large cubes. Squeeze 1 lemon with a lemon juicer.

In a small pot or saucepan combine apples along with 100 milliliters water, the lemon juice, 50 grams sugar & 2 sachets vanilla sugar & mix until well combined. Bring to a boil over low to medium heat, then allow to cook with the lid closed for about 10 – 12 minutes until the apple pieces are soft, stirring occasionally. 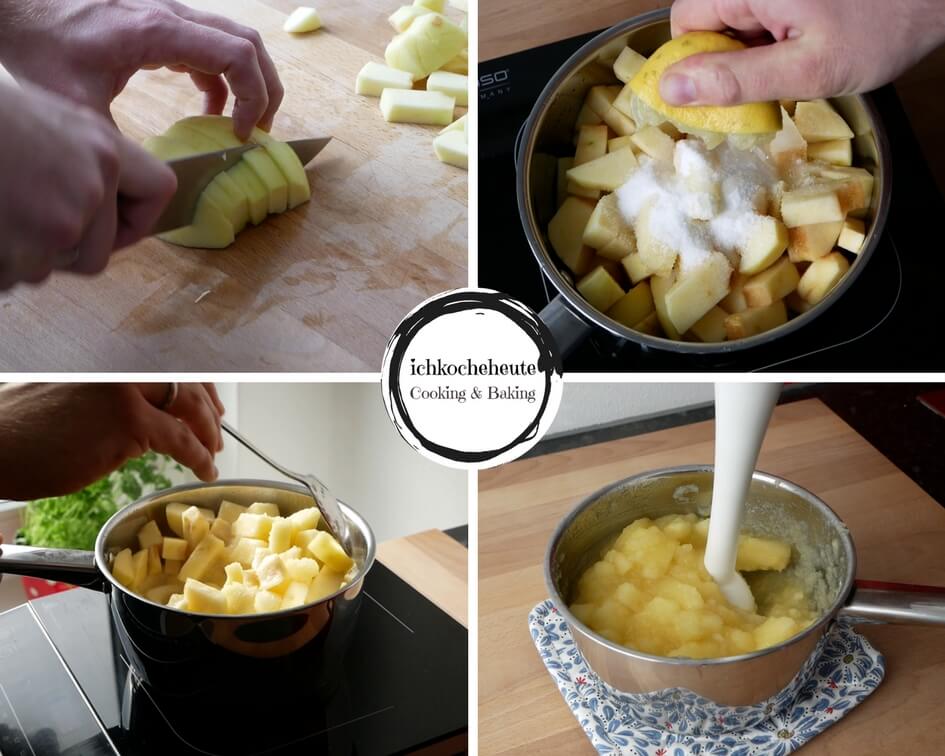 Next, pull the saucepan from heat & mash up the apples with a blender until creamy. Then set the applesauce aside & allow to cool.

…preparations for the potato pancakes:


Peel 1 onion & chop finely. Also peel 1,25 kilograms potatoes & 1 large carrot, then coarsely grate them. Put potato & carrot rasps into a clean kitchen towel & squeeze out the liquid over the sink as best as you can. 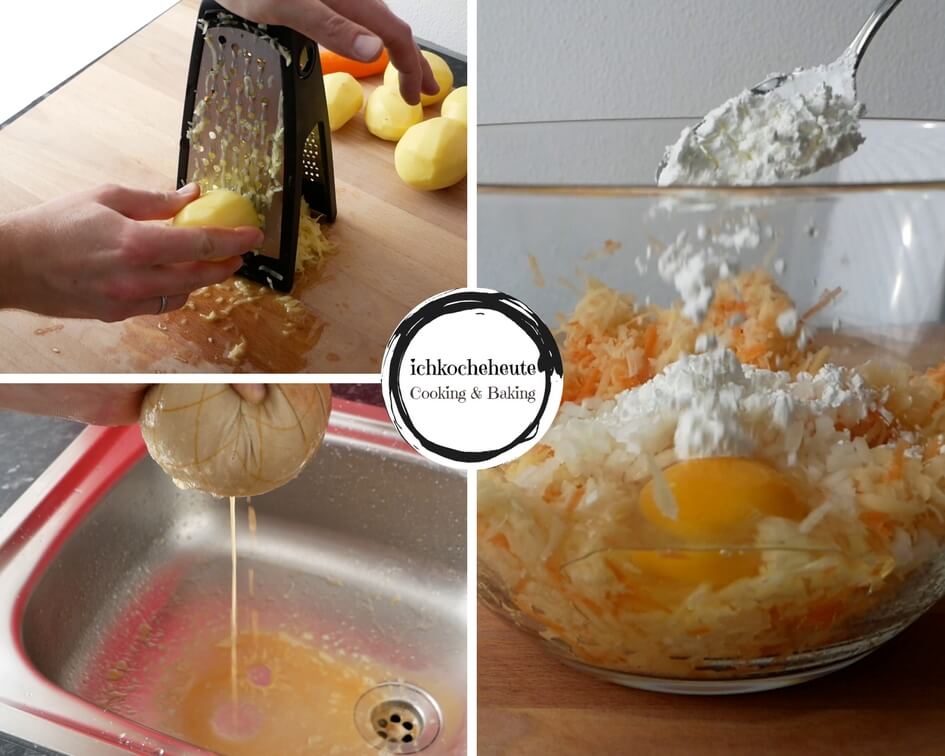 Preparations for the Potato Pancakes

…for the potato pancakes:

In a mixing bowl combine potato & carrot rasps along with the chopped onion, 1 egg, 1 heaping tablespoon cornstarch, ½ teaspoon nutmeg & a generous pinch of salt & pepper & mix until all ingredients are well combined. 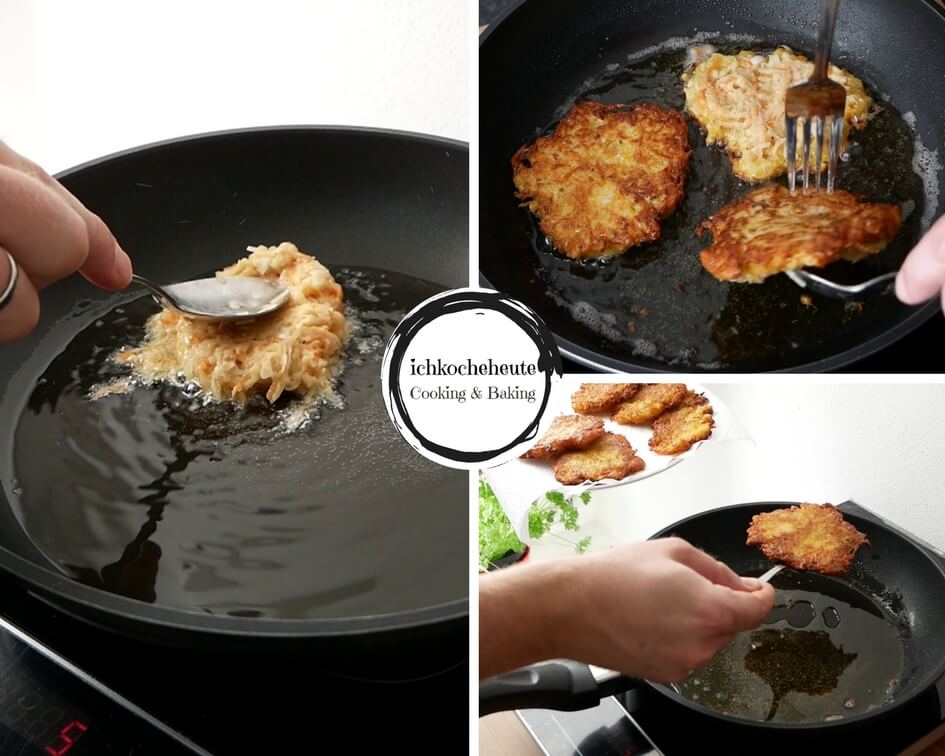 Next, heat up a large frying pan adding plenty of oil (the pan’s bottom should be covered completely) & once the oil is hot enough give the potato dough by tablespoons into the pan & smooth down a bit. Gently roast the potato pancakes each side for about 2 – 3 minutes until golden brown, then turn once & brown until done on the other side for another 2 – 3 minutes.


Lift the done potato pancakes out of the pan & allow to drain on kitchen paper. Afterwards serve them along with the homemade applesauce.

I wish you lots of fun cooking 😉